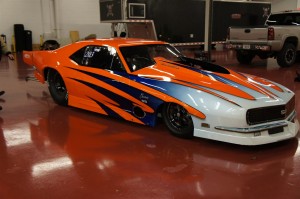 “Starting this year, I have purchased a Jerry Bickel 2010 ‘68 Camaro Pro Mod and hope to test very soon.  I will continue to run a nitrous setup and not jump into the turbo or pro charger game.  I like seeing a nitrous car beat those guys,” he laughed.  “I plan on running the NMCA Pro Street class this season at select events and as well as with the Chicago Wiseguys, which is a group that run at my home track,  the legendary Great Lakes Dragway, in Union Grove, Wisconsin.”

“I truly enjoyed Frank Hawley’s Drag Racing School and I look forward to sitting in on some classes in the future,” he added. 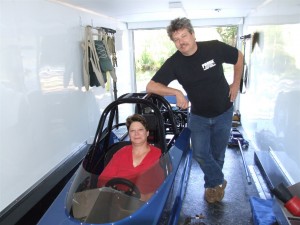 Mike and Dee Stevens, who hail from  Thunderbolt, Georgia, have a very busy 2012 race season ahead of them.  Mike first participated in a Super Class at Frank Hawley’s Drag Racing school in 1993. Mike returned to Frank Hawley’s Drag Racing School in 2009 to cross grade his NHRA license and this trip his wife Dee joined in on the fun, earning her NHRA Super Comp license in the process.

After selling their individual dragsters a couple of years ago, the duo recently  finished up their new American dragster and were able to take it out a few times last year. “With both Dee and myself driving, we tested the car and it made runs in the mid 4.80’s @ 143, in preparation for 2012.  Oakley Motorsports built a new engine for the car which is an all-aluminum 615″ BBF.  On the dyno, it showed 1123 HP and 930 ft/lbs of torque. We have plans to run some fast bracket races, like the Jegs Super Quick series and maybe some NHRA/IHRA Top Dragster events. So we may have to visit the school again so we can upgrade our 4A NHRA license to 3A for both of us!” 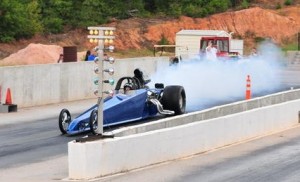 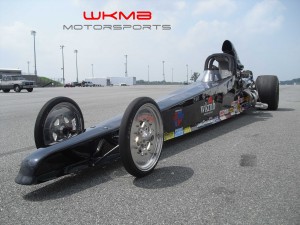 Northern Florida resident and 2009 Super Class grad, Bill Rodda was not new to the sport and had actually been drag racing since 1969. “I raced Super Gas for years and then took a break in 2005.  In 2009, I decided to get back into the sport only this time in Super Comp.  My decision to take Frank’s course to get my license, instead of the good ole’ way, was a wise one.  I’ve spent thousands and thousands on high-tech parts to make my car as reliable and repeatable as possible, yet I had spent next to nothing on the one part that can wind up losing me the most rounds and that was me,” he stated. Well, Frank’s course was money well spent. The portion of Frank’s class which he taught us the mental aspect was most beneficial for me.  His teachings simplified my thinking, cleared out my “attic” at game time and has made my starting line performance as reliable as the car under me.” 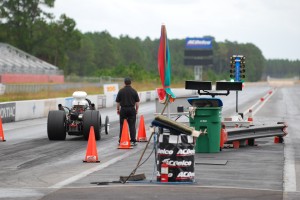 Rodda has been progressively busier racing each season since his 2009 Hawley class and obtaining his Super Comp license. He competed in two NHRA Div. events in 2009, four in 2010 plus the GatorNationals and I will be sawing away at it again in 2012.

“The confidence gained, in no small part, from Frank’s teaching is now one of my most potent weapons on race day.  Now, win or lose, it’s always a dog fight, no matter how tough the opponent,” he explained.  “Frank’s school helped get me there.  I really appreciate his sharing of his considerable knowledge and would recommend the school to anyone who wishes to learn or improve, no matter the category.”