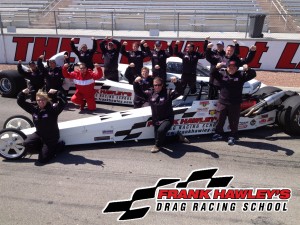 The Strip at Las Vegas Motor Speedway is always a very popular location for Frank Hawley’s Drag Racing School’s highly celebrated Super Class. The first stop at the exquisite facility for the drag racing school was full of a group of assorted students of all ages, backgrounds and racing experience.

Taking part in the first of two spring Las Vegas classes, Spanaway, Washington resident Jim Denison chose to drive one of the school’s Super Gas cars.  “I have been a fan of drag racing for years and wanted to go to the school for some time, actually for over twelve years.  Finally, the opportunity presented itself and my wife Katie decided it was a good time for me to go.  I have been in the Army as a mechanic for twenty years and look forward to building a life in drag racing after I retire.  I like to call going to the Frank’s school the first step in my new life.  At the time I attended, my only real drag racing experience was helping my daughter run a JR Dragster for the last 8 years.”

“The class was awesome,” Denison exclaimed. “I went there thinking the driving was going to be the best part but I found the classroom portion to be just as interesting with all the topics that Frank covered.  I would have to say that I am going to recommend this class to everyone I know.”

Denison is currently building a back half Camaro that he hopes to campaign as well as looking acquiring a Super Comp Dragster. “I went to the school thinking I was going to become a better drag racer but I honestly feel that I left the school a better person.  A lot of the classroom lessons were very motivational and can be used in all aspects of life, not just racing.  I would like to thank Frank for the awesome instruction. I know that my daughter will be attending Frank’s class to achieve her Super Comp license soon and get some very good life lessons from an outstanding teacher!” 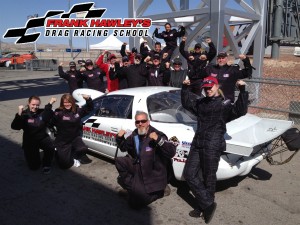 Bob Fenton, who is a physician and professional pilot, attended during the second class and also drove in hopes of acquiring his Super Gas License.  “When I was a teenager, I was active in drag racing having built my own car.  After many years of following the sport on the periphery and having a desire to join the 9 second club, this course offered me the perfect opportunity to pursue this dream.”

While Fenton works for a Fortune 50 company as a pilot and has flown the fastest corporate jets in commercial aviation, he confesses that he personally had a few surprises.  “I found the simplest of actions to be most difficult.  Lining the car up in the lane and aiming it in the right direction was far more difficult than I anticipated.  Attention to the smallest details is far more important than first thought.

“The combination of the class, driving, and video critique following driving was a perfect way to solidify improvement of the racing experience,” Fenton continued.  “The cars performed well and it is hard for me to imagine what a 6 second run, needless to say 4 seconds, is like.  Frank has an unusual way of combining the racing experience with physiology and psychology.  When I signed up for the course, I had no idea that this was a course on the power of positive thinking or concentration and attention.  He is incredibly perceptive and observant, all of which enhanced what I got out of the experience.”

Seemingly more hooked on the sport of drag racing than before, Fenton is quick to point out his future plans to return to Frank Hawley’s Drag Racing School.  “I would like to come back and take the advanced course and most certainly repeat the same experience in the dragster.  I also have a 1955 Chevy Nomad with a 502 CI engine and nitrous and now intend to race the car.”

In addition to the Las Vegas Super Classes, Frank Hawley’s Drag Racing School offers classes throughout the year and across the U.S.  For complete details on this course and all offerings, dates and locations, contact Frank Hawley’s Drag Racing School by calling 866-480-7223 [Outside the U.S. 678-804-8835], online www.frankhawley.com. Also look for the school on Facebook and YouTube.