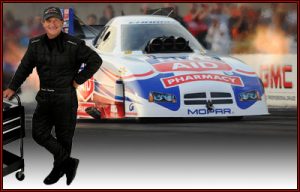 Licensed to drive dragsters at the age of 16, Frank has spent his life driving some of the fastest machines on the planet. He built his racing career piloting 330 mph Top Fuel Dragsters and Nitro Funny Cars in addition to obtaining NHRA competition  licenses in 6 other categories.  Over the past 3 decades Frank has taught thousands of drivers how to improve their personal performance, on and off the track.  Over the past couple of seasons Frank’s graduates have won 10 World Championships in the fastest categories of NHRA competition including Top Fuel Dragster and Nitro Funny Car.  When not teaching regular driving classes, Frank consults with many of NHRA’s top professional drivers.