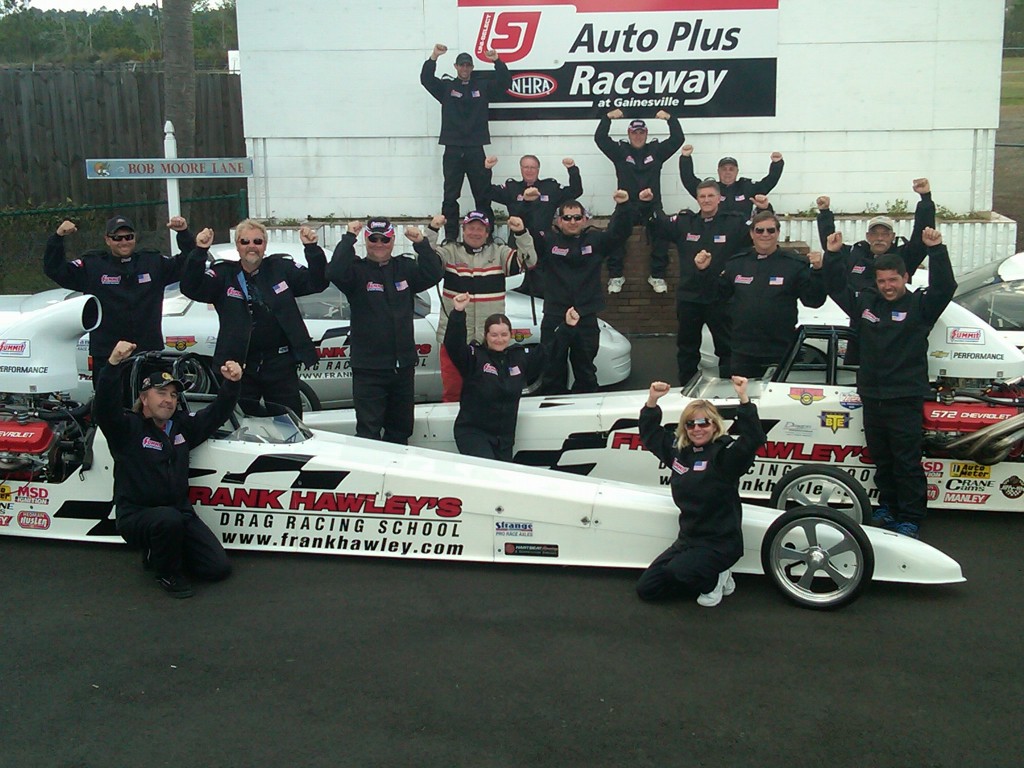 Continuing a long standing tradition, Frank Hawley’s Drag Racing School provides students, who wish to combine their vacation experience at the historic NHRA GatorNationals, with a convenient class date following the thrilling event in which they can undergo their own drag race driver’s training and work on acquiring a NHRA competition license.

Shortly following the commencement of the NHRA national event, drag racing enthusiasts, driver’s looking to improve their skills and those new to the sport alike, all convened for their two day Super Class at Auto Plus Raceway at Gainesville where the sixteen drivers would begin their personal training with Two-Time NHRA Nitro Funny Car World Champion, Frank Hawley.

Rick Given, of British Columbia, Canada, has been drag racing for many years and as of late, moved from his eleven second car to his much quicker ’27 Ford Roadster. While Given currently holds an NHRA competition license to compete in his shorter wheelbase car, he explains why he chose to attend the Super Class and work with Hawley. “I wanted to learn more of the science of drag racing and hopefully become a better racer,” said the self-employed contractor, who licensed in one of the school’s dragsters.  “We own, maintain and drive a low eight sec roadster which is our second car. We have top five finishes the first two years out. The classroom portion was awesome as it offered a lot of insight and was more than I had expected.  I will say that especially the in-depth talks on the mind and the mental part of racing.” 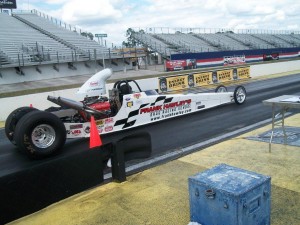 Given looks to continue to race sportsman classes and visit more tracks with a possible move to a Top Sportsman car.  “I can’t wait to hit the strip and implement what I learned during Frank’s class,” he added.

Fellow classmate, Steve Luce also attended the class and licensed in one of the school’s Chevy Performance powered dragsters.  On his way down from Ontario, Canada, to attend the nationals and take part in Hawley’s Super Class, Luce stopped off in Georgia and purchased two turnkey dragsters of his own that he looks forward to entering in some big money bracket races.

“I chose the class because I am getting a little long in the tooth at fifty-five years old and wanted to learn properly from the best,” shared the recently retired locomotive engineer. “I wanted to be competent on the track as soon as possible, instead of wasting years learning from the mistakes of myself and others.  My passion has mainly been building and flying homebuilt float planes with drag racing always on my mind.  Moving to drag racing wasn’t feasible or practical until now.  I tried an attempt at a big block altered thrity years ago but time and money didn’t pan out.  Coming to the class, I had some minimal experience with my friend’s thirteen second door-slammer bracket car.” 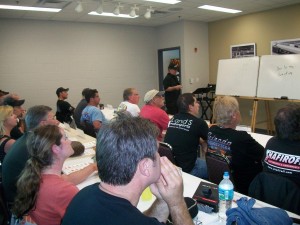 “I paid very close attention to everything that transpired and I must have looked like a ‘sponge with hair’ absorbing all the info,” he joked. “Frank’s classroom and lectures were exactly what was needed to become confident and relaxed driving the car. It was all excellent reinforcement for my own personal philosophy on life and the meat and potatoes needed to competently drive a drag race car, which the school’s dragster was awesome to drive.”

Sharing in the Hawley school experience was Jason McCoy from Rusagonis, New Brunswick, Canada. McCoy is a licensed plumber and has been self-employed for several years. “I have been drag racing for roughly fifteen years now. I currently own a ‘99 Mustang GT 4.6 with an F1R Procharger. It’s a true stock suspension radial tire car. I have been in the 8.0’s with it, but wanted to attend one of Frank’s classes to earn my competition license. I found the Super Class very educational and it was nice how Frank helps open one’s mind to learn simple things. There was really a lot of mental training involved.”

Now that McCoy has competition license in hand, after successfully earning it driving one of the school’s Dragon Racing Fuels powered Firebird’s, he’s broadened his drag racing plans for the future. “I’m looking forward to competing in the X275 class, NMRA and Atlantic Canada’s All-Out Race,” he pointed out. “And I will be using the new RePlay camera I bought for my class, too. It’s great and I love how easy it is to use.”