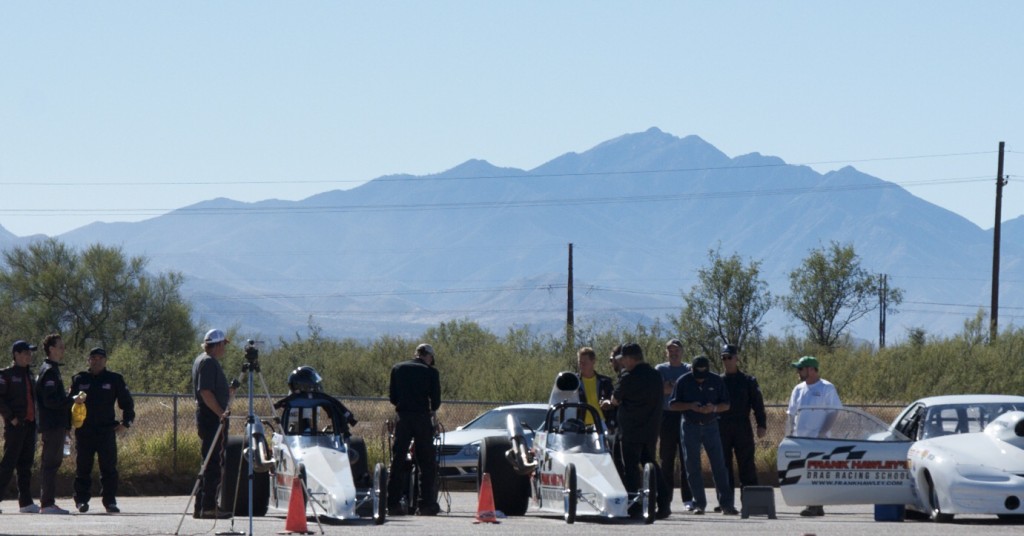 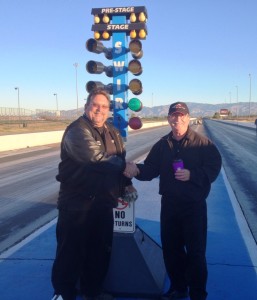 “We are excited to be heading to Wild Horse Pass Motorsports Park in Phoenix this winter.  The weather in Phoenix around that time of year is spectacular.  We will be running our classes following the NHRA Divisional race, so race fans from around the country can have a total motorsports experience.  They can watch the races and then do some driving themselves,” said Hawley, owner and chief instructor of the school.

Hawley points out that the competition course which can provide drivers with an NHRA 4A or 4B competition license is not just for those who want to go racing.  “In every class we have ever held we have had experience levels that ranged from veterans to folks that have never staged a car,” said Hawley.  “Over the years we have worked very hard to develop a curriculum that never talked over someone’s head.  I have always believed it is essential that we offered classes where everyone felt comfortable no matter their age or gender and that we provided an atmosphere where each person could enjoy themselves,” added Hawley.  Racers can also choose to attend one of Hawley’s lectures on ‘Personal Performance Development’ which is offered as part of the Competition classes.  Many of today’s top professional and sportsman racers have attended and greatly benefitted from Hawley’s teachings.

So whether you want to earn your license, improve your skills, check one off your “Bucket List”, upgrade your current license, or try the new Dragster Adventure with Side-By-Side Racing, we hope you’ll join us in Phoenix for an experience you’ll remember forever!

Here’s a few quotes from some of last year’s Phoenix grads:

“Best experience I’ve ever given myself! I would be forever blessed if I only retained even a quarter of what I heard & learned… Thank you!”  Windy

“I just want to drop you a short note to thank you all and most of all Frank for giving me opportunity to get my License. I learned a lot in class and a lot of it I have applied to my business (American Walk in Coolers) the idea of staying calm and not to over react to things that happen which are out of our control was great, there was a ton of other things I leaned and I thank you Frank, It was all good stuff.”  Gene

“ I wanted to thank everyone at the school for their help and a special thanks to Frank . I ran my first race this past weekend and ended up going to the finals with over 30 cars in the field and finished runner up running a super pro class with a local drag club.”  David

This has been a great year! We’ve covered the country from California to Washington to Pennsylvania with lots of places in between.

Our first full season with our Dragster Adventure thrilled drivers and produced some fabulous side-by-side racing and our school is still the only place student drivers can race dragsters in “side-by-side” competition.

Take a look at the video of the John Force Corporate Adventure day. You’ll see John with his daughters Courtney and Brittney and his team driver Robert Hight enjoying a day with their sponsors at our school.
https://www.youtube.com/watch?v=mAYWcYHztLg

Our school is the perfect place for you, your friends, customers or employees to join in the activities during the Adventure program 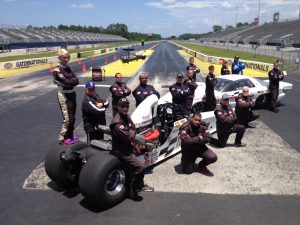 s.  We can plan a private session just for your group!

The fall weather is spectacular here in Florida. We’re enjoying 70 degrees and sunshine while many people are stuck in the “polar vortex”. So treat yourself to a trip to Florida. We have a full schedule of classes in everything from Super Comp and Super Gas to our 200 mph Alcohol machines.

Many dates and locations have been finalized for 2015, so if you can’t make it to Florida this winter (although you should really try!), take a look at our other locations and decide what other race track will work for you or your group. https://frankhawley.com/class-dates-locations/

2015 will mark our third decade of providing excitement, thrills, education and fulfillment of many drivers’ dreams. We would love to help make it a memorable year for you behind the wheel!

We look forward to hearing from you!

Click on the link below to read about what we’ve been up to so far this year!  It’s been very busy indeed!

Contact us to schedule your Adventure or License Course!

For all you folks who have been patiently waiting for us to get a Houston date – well, here it is!  We’ll be at Royal Purple Raceway in Houston, TX conducting our popular Super Comp/Super Gas class on April 16-17, 2014.

ool’s 572/720R Chevrolet-powered Super Comp Dragsters or Super Gas Firebirds.  Some drivers even obtain both licenses during the class.  Current drivers can bring their own car to the course, too.  The course also includes Hawley’s Personal Performance Development lectures.

You don’t need any previous racing experience to take the class,” continued Hawley.  “In every class we’ve got drivers that have never raced sitting next to drivers that have won big money bracket races.  It’s a great mix, with the rookies being able to benefit from some of the veterans’ backgrounds.  But not everyone needs a license; some just do it for fun and excitement.”

The school will be heading to Wild Horse Pass Motorsports Park in Phoenix, AZ at the end of  February; back to Auto Plus Raceway in Gainesville, FL for class after the Gatornationals; to Auto Club Dragway in Fontana, CA for both the Super Comp & Super Gas class AND the new Dragster Adventure and Dragster Adventure Challenge; to Royal Purple Raceway and then to Gateway Motorsports Park in St. Louis, MO. 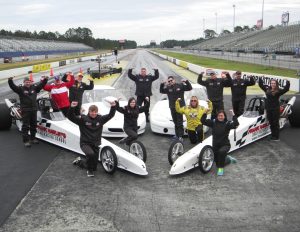 Beginning in April of 2014 Frank Hawley’s Drag Racing School will begin classes at The SoCal Auto Club Dragway in Fontana! It’s been several years since the school has offered classes in California but the re-opening of the drag strip at Fontana will give those on the west coast the opportunity to attend the best drag race programs in the country.  Frank Hawley’s Drag Racing School will be conducting Super Comp and Super Gas classes at the world class facility as well as the school’s new Dragster Adventure  program where you can Drive A Dragster for $399!  How would you like some Side-by-Side racing?  You can do that too in the Dragster Adventure Challenge.  Take a look at the attached flyer…………. Dragster Adventure

While we’re on the topic of new locations… consider visiting us at the new Wild Horse Pass Motorsports Park in Phoenix AZ.  We’ll be there in February following the NHRA national event with classes in Super Comp and Super Gas for the ‘door car lovers’!

Maybe the mid-west next spring will be a good time for you to do some driving.  Then you’ll want to drive with us at Gateway Motorsports Park in St. Louis. But if you just can’t wait and you want to get out of the cold weather and do some driving this winter come and visit us at our home in Gainesville Florida.  We’ve got a busy schedule all winter long in Gainesville Florida where the weather forecast is hot and fast!

Please remember that a trip to Frank Hawley’s Drag Racing School is a great Christmas Gift no matter what program or location you choose!

So give us a call or email and let’s get ready for some High Speed Excitement!