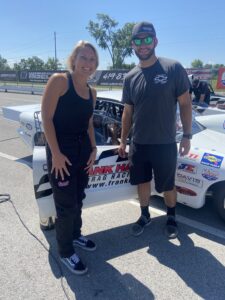 Mark and his wife, Bonnie, raised their children to be strong, independent young adults and encouraged them to pursue their passions. Kyle played football for the University of San Diego while Kassandra pursued swimming and softball. Although Mark had taken a hiatus from drag racing for more than a decade to focus on his family, both Kyle and Kassandra encouraged him to get back at it with NHRA Factory Stock – and they each wanted to give driving a try, too.

“My wife and I talked and we both wanted the kids to go to a drag racing school to get experience, but the only place I would allow them to go was Frank Hawley’s School,” stated Mark. “I attended several times through General Motors when I was racing professionally, and I knew it’s a professional, first-class operation.”

When the family realized that there was an upcoming session in mid-July of 2022 at Summit Motorsports Park in Norwalk, Ohio, they seized the opportunity to finally have Kyle and Kassandra participate at a track near their homes.

Kyle, 25, works by day as a superintendent of a Cleveland-based general contractor but is still actively involved in drag racing and had already been down the track a few times in a variety of Sportsman cars. “When we showed up, I didn’t know anyone except my sister. It was an interesting dynamic – we were the youngest ones there,” shared Kyle, who expected more rookie racers of his own age. 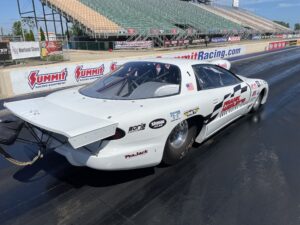 The two-day licensing school kicked off with Frank Hawley’s renowned classroom sessions where he educated students on the logistics of drag racing and the importance of the mental side of things. “It was great and they taught us so much,” Kyle added of the experience, which soon transitioned to on-track racing. “I was happily surprised that, after making a run, they would go over the details and discuss the things we could be doing better. I enjoyed learning how your brain works and how that impacts your function as a driver.”

For him, letting go of the trans brake button for the first time was a truly memorable experience. Kyle quickly got the hang of things, though, as he went from initial sensory overload to more situational awareness. “At first, it was just, hold on and go straight and hope it’s okay,” he laughed. “By the end, I had a better feel of where the car was on the track, what it was doing, and what I was doing as a driver.”

Kyle was able to drive both a Super Comp dragster and a Super Gas door car. Although he enjoyed piloting a dragster for the first time, he prefers the greater challenge that an enclosed door car provides due to the limited visibility.

“Overall, it was a great experience and I was fortunate to be able to attend Frank Hawley’s School,” affirmed Kyle, who is already hard at work building his own Chevrolet to run in Super Gas in the near future. “Learning from some of the best in the sport was huge, and everyone was very helpful.”

Kassandra, however, had never been down the drag strip at all – despite having worked in hospitality and social media for years with many of NHRA’s top-tier teams. 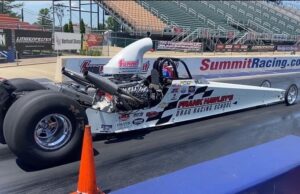 “The classroom was excellent and then it was time to get in the car… I wasn’t nervous about racing until I did it!” confessed the 27-year-old. Although she admittedly struggled with stress, it was thanks to the support and encouragement of both the School’s staff and her fellow classmates that Kassandra was able to push through and persevere in the School’s Super Comp licensing course. “By day two, it was totally different and I had a lot of fun.”

For her, enjoying the experience was secondary to being able to more accurately understand what her client-drivers go through on a day-to-day basis. Kassandra was pleased to expand her working knowledge from behind the starting line to behind the wheel, too, which will ultimately strengthen her career.

“It doesn’t matter if you’ve been in a car or never raced at all like me… if you have the chance to attend the Frank Hawley School – do it!” asserted the media professional.

“I’ve known Mark for many years and have great respect for him as a racer, businessman, and parent. Mark and Bonnie should be very proud of Kyle and Kassandra. These are bright kids that will do very well in any profession they choose,” said school founder, Frank Hawley.

With both Kyle and Kassandra having excelled during their time at Frank Hawley’s Drag Racing School, their father, Mark, is thrilled to see the second-generation racers following in his footsteps. His parents were there to encourage his drag racing endeavors, and he is honored to now be able to do the same for his children. “I got goosebumps seeing them run,” he said. “I don’t know where their paths will go, but if I’m on the starting line watching, then Bonnie and I will be pretty lucky.”