Thanks to his family’s unwavering support, accomplished Jr. Dragster driver Jonathan McClain took the next step towards accelerating his future when he completed the NHRA Super Comp competition licensing program at Frank Hawley’s Drag Racing School.

The young racer was gifted his 2002 Spitzer Junior when he was just seven years old. Although he didn’t make his first run until he turned nine, Jonathan showed tremendous natural talent as a 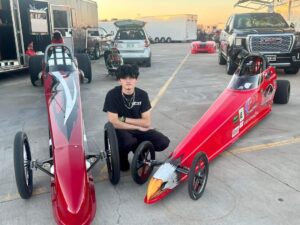 driver and went on to earn some serious accolades.

Hailing from the Tulsa, Oklahoma area, Jonathan was a runner-up at the 2015 NHRA Bracket Finals in Texas and went on to win the NHRA Western Conference Finals Championship in 2017. He earned many more wins and runner-up finishes over the years, and was both the Tulsa Raceway Park track champion and the Mid-West Drag Racing Series Jr. Dragster Pro champion in 2021.

Jonathan has been featured in multiple magazines, interviewed by many media outlets, and has received a plethora of awards for his impressive achievements. “He’s also made it to the final round at every Western Conference Finals or Eastern Conference Finals that he’s raced in for five years in a row,” added his proud father and fellow School graduate, Jacob McClain.

Jacob completed his Super Comp course with Frank Hawley’s Drag Racing School in 2016 at Gainesville Raceway in Florida. At the time, he drove a big block Chevy-powered Altered and was hoping to improve his own career, but decided to sell his car and focus on his son’s future instead. “I tried to teach Jonathan a lot of what I learned from Frank [Hawley] about the mental and psychological preparedness so that he could put the knowledge to use, too,” noted Jacob. “I got a ton out of the class that I use in everyday life, not just at the track.”

Jacob and his wife, Jayme, wanted their son to enjoy the same great Frank Hawley’s Drag Racing School experience, too, so the McClain family packed up and headed down to Gainesville in early February. 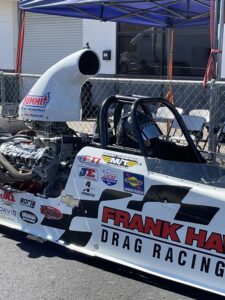 Just a few short days after Jonathan’s sixteenth birthday, he began the 2-day course and spent time in the classroom learning from Hawley’s comprehensive program. “Being in the classroom for 14 hours was a lot, but it wasn’t overwhelming – it was fun and Frank made it interesting. It was a lot better than being at school,” proclaimed the respectful young man. “I learned that you can’t make excuses about your environment, you’re in control and the outcome is based on how you handle everything.”

When the time came for Jonathan to step up into a big car for the first time, he was both excited and apprehensive. Just as expected, though, the experienced NHRA Jr. Dragster champion easily transitioned to the more powerful Super Comp dragster.

“It was different learning to use the trans brake instead of foot braking, but I came back from my first run with a big smile on my face,” Jonathan recalled excitedly of how he couldn’t wait to make another pass. “I would tell other drivers coming to the school that they should be prepared to get a lot of information really fast.”

Jacob and Jayme watched their only child from the sidelines with pride and were impressed by how consistent, and quick, his reaction times were. “It was a little like watching him run his junior for the first time. He took it seriously and seeing his excitement was worth every penny,” affirmed Jayme, who knows the Super Comp course will help Jonathan as he transitions into the next stage of his racing career. “I’m planning to have him go back to Frank Hawley’s Drag Racing School to take the Top Alcohol Dragster course after he’s been in a Super Comp-style bracket car for a year.”

Both parents have worked hard to give Jonathan every advantage they can to help him understand all aspects of the racing business. They encourage him to work out his own deals with sponsors, such as FTI Farm Team, E3 Spark Plugs, Trailer Alarms LLC, and Viperizer, and know the practice will help him later in life, too. “We truly appreciate everyone that has helped us along the way, and we wouldn’t be where we are without the assistance of good people, great friends, and supportive sponsors,” added Jacob.

Looking ahead, the McClain family plans for Jonathan to continue to run his McClain Racing Jr. Dragster until he ages out of the category and has also secured a seat for him in a Super Comp dragster so that he can race in the Mid-West Drag Racing Series’ Top Dragster class as well.

“The NHRA Jr. Dragster program is a fantastic way to get started, and every Junior driver we’ve had does a great job. Jonathan was a classic example of that; he was very familiar with the sport and took to the Super Comp car quickly,” added Hawley, whose school has hosted hundreds of second- and even third-generation drivers over the years. “I had very supportive parents throughout my driving career and Jonathan does as well. I look forward to working with him and his family in the future.”

With many years of on-track experience under his belt already, the up-and-coming driver’s time spent at Frank Hawley’s Drag Racing School will surely aid Jonathan wherever he winds up – whether that’s crewing on a top-level Nitro car or, perhaps, even driving one himself.