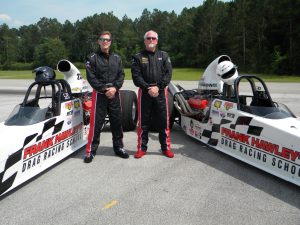 rads Dave Shotsberger and Mike Egan raced two of the Hawley School S/C dragsters at the NHRA Southeast Division race in Bristol, TN last weekend.  Egan did well, advancing to the second round while Shotsberger was number 1 qualifier with a perfect 8.900 run!  Dave then went 5 rounds to reach the semi-finals, where he lost in a very close double break out run by .002 seconds!

“Everyone knows about our school and the thousands of grads we’ve had over the years, however not everyone knows that we also ‘lease our race cars’ to our graduates. Although many drivers end up purchasing race cars after attending our
school some want to try racing without making the long term commitment.  For these folks leasing one of our cars is a great alternative,” said school owner Frank Hawley.  “Dave and Mike have raced with us before and we had a lot of confidence they would do well 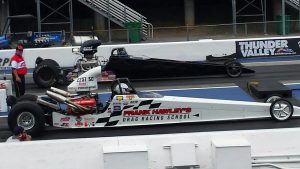 going into this big race.”

“Frank’s staff and equipment are the best,” said Shotsberger.  “Each time I’ve raced with them I’ve had a great time. The cars were near perfect and Jimmy and Derek gave me the confidence and the race car to go all those rounds.  Even though we lost in the semi-final round it was one of my best runs ever by the numbers and a very close loss. Certainly a run to be happy with.”  Mike and I have raced together many times and become good friends.  We’re planning on racing again next year.” 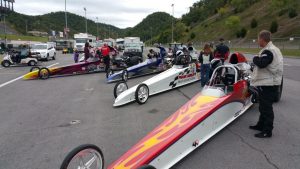 “I’ve been racing one of Frank’s cars for the past few years and always had a wonderful time,” said Egan.  “As a retired pilot I appreciate the attention to detail that the crew gives to the preparation and operation of the race cars.  The cars always run great and the tuning is spot on. The Bristol race was a tremendous amount of fun.  I can’t wait for next season.”

The cars that Shotsberger and Egan raced in Bristol are the same cars that students get to learn to drive at the school!  Frank Hawley’s Drag Racing School can give anyone the chance to go from a complete beginner to the winners circle!

For more info on any of our classes visit our website at www.frankhawley.com or contact us at 866-480-7223!