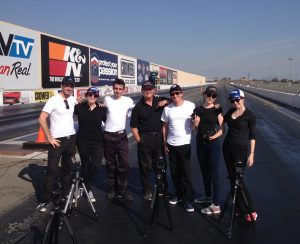 Dream Ignition – a fitting title for the documentary being made on our Australian grad Stephen Sadler.  Stephen has cystic fibrosis and we were happy to be a big part of his dream!  He earned his Super Gas license during our classes at Auto Club Dragway in Fontana last October.

Please watch the trailer below and be inspired by his story!

(right click on the link if it does not play automatically) 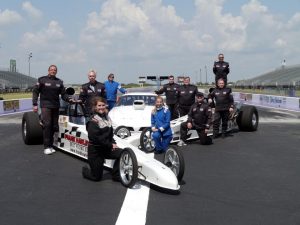 We’ll be at Royal Purple Raceway in Houston, TX conducting our popular Super Comp/Super Gas class on May 13-14, 2015 as well as holding the Dragster Adventure/Challenge with side-by-side racing on May 15th.

The two-day Licensing Class allows drivers of all backgrounds the opportunity to earn their NHRA competition driver’s license in the school’s 572/720R Chevrolet-powered Super Comp Dragsters or Super Gas Firebirds. Some drivers even obtain both licenses during the class. Current drivers can bring their own car to the course, too. The course also includes Hawley’s Personal Performance Development lectures. You don’t need any previous racing experience to take the class,” continued Hawley. “In every class we’ve got drivers that have never raced sitting next to drivers that have won big money bracket races. It’s a great mix, with the rookies being able to benefit from some of the veterans’ backgrounds. But not everyone is after an NHRA license; some just do it for fun and excitement.”

If you just want to have fun and make a few laps down the track, then the Dragster Adventure or Dragster Adventure Challenge is for you!  These cars accelerate 0-60 mph in less than 3 seconds, run in the mid-10 second range at about 130 mph and the program starts at just $399!

Classes are offered throughout the year in Gainesville, Denver, St. Louis, Norwalk, and Reading.  Visit our website for a complete list of dates.  Dates for Corporate Adventure groups, Top Dragsters, Nostalgia Funny Car and the Alcohol classes are available on request.

To view our License Class video or obtain more information on all available classes, dates and locations for Frank Hawley’s Drag Racing School, visit the school’s website – www.frankhawley.com – or call 866-480-7223 (Outside U.S. 678-804-8835).

Here’s what some of our recent grads had to say about their class:

“This was by far the BEST WEDNESDAY OF MY LIFE!  Thanks to the outstanding program offered by the Hawley group.  They are the best.  I will be back! I thank everyone involved, Frank, Lana, Jeff and all the rest.  My bucket list has 1 less thing to do!”  Kevin Crawford, Dragster Adventure Challenge Winner

“I’m still processing my two days at drag racing school. I learned as much about myself as I did about racing, which is what I was looking for. Instead of lecturing about cars and driving, Frank teaches the bio-mechanics necessary to perform a precise task under pressure, and the state of mind needed to do well. Drag racing requires a keen self-awareness and presence in the moment.”  Joseph Brown, Super Gas Firebird

“I attended your super comp class on December 2 & 3 in Gainesville and 7 weeks later I have a Top Fuel Dragster license and I couldn’t have done this without the things you teach your students. Thank You!”  Shawn Reed, Super Comp Dragster now Top Fuel driver!

“I learned much more than I expected to and had fun doing it.  Frank is a terrific teacher! And I’ve had lots of teachers over the years (undergraduate school, medical school and 6 years of surgical residency).  The teaching format worked well for novices and experienced racers. The cars worked flawlessly and were equal in elapsed time. I was surprisingly comfortable despite my sizable frame.  My diminutive wife was comfortable too. The adjustability of the cars make them the right size for any driver.  Derek and Jimmy were a tremendous help before and after each pass.  I look forward to returning for the super comp/super gas program.  I’ll be bringing my friend Wayne down with me so he can work on his lights too.”  Dr. Ron Franzino, Dragster Adventure winner 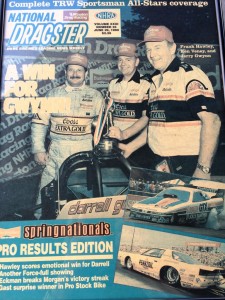 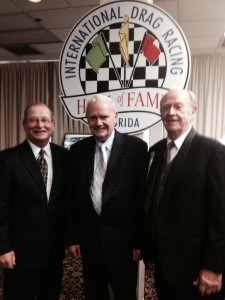