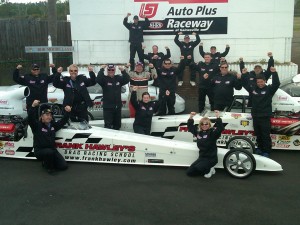 We have confirmed some dates for our home track in Gainesville, FL for the first part of 2013, along with Las Vegas, Indy, Norwalk, Houston and Maple Grove.  More dates and locations will be available soon.

So whether you just “want to have fun”, are looking to start racing and want to drive one of our Super Comp or Super Gas cars, upgrade to Top Dragster or Top Sportsman, or you want to bring your race car to improve your skills…we hope to see you at one of these classes!

To view our Super Class video or obtain more information on all available classes, dates and locations for Frank Hawley’s Drag Racing School, visit the school’s website – www.frankhawley.com – or call 866-480-7223 (Outside U.S. 678-804-8835).  The school’s also on Facebook, Twitter @Frankhawleydrs, Instagram – frankhawleydragracingschool and YouTube!

A decision to attend Frank Hawley’s Drag Racing School is an easy one.

“I am often asked how come it looks like I know what I am doing in a fuel funny car and my answer is ‘I listened to everything Frank Hawley told me.’  I do not have natural talent.  Frank’s instruction on how to drive a Super Comp car is exactly what you need to drive a Funny Car.  If you have the desire and listen to Frank, you too can drive any type of race car.  Honestly, I think the classroom part of the course is much more important than the racetrack part of the course.  He is the most thorough teacher I have ever met.” – NHRA Funny Car Driver Robert Hight

“The information I received at the School from Frank has improved my life professionally and personally. Everyone that wants to improve their mind and their skills should take this course.”- NHRA Top Fuel Driver Antron Brown

“I started at Frank’s in his Alcohol Funny Car class. It was a great program and got me started in the right direction. I’d recommend his course to anyone. I always say you’re only as good as the people you surround yourself with, and Hawley’s School is a heck of a place to start.” – NHRA Top Fuel Driver Tony Schumacher

“Frank knows what he’s talking about.  He understands the demands placed on drivers today and is able to work with drivers at all levels, from novice to Pro.  If you’re thinking about race instruction, you need to go to Frank.” – NHRA Top Fuel/Funny Car/Pro Modified Driver Melanie Troxel