Houston Grads Flying High With the school making several visits each year, Royal Purple Raceway in Houston, TX is a familiar location for 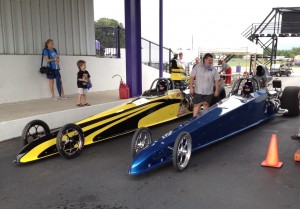 Frank Hawley’s Drag Racing School. On this trip, the school hosted returning grads along with new drivers. Sisters Ashley and Crystal Peterson returned with their own 7-second dragsters, John Williams and his son Kyle joined in driving the Super Gas car and the Super Comp Dragster, while veterans like Tina Stull were there to get a better handle on tuning their Super Comp Dragster. After graduating from the school’s recent Houston course, Major Matthew ‘Burt’ Reynolds is one of the newest Hawley alumni. Burt is a USAF F-16 pilot currently stationed at Randolph Air Force Base in San Antonio, TX and a long time drag racing fan.

“I was first exposed to drag racing at Pomona Raceway in California. My Dad took me there as a kid and I loved it,” Burt said. “Frank and I met a couple of years ago in Las Vegas. At the time, I was flying F-16’s and was in the Aggressor Squadron at Nellis Air Force Base. I was at the track coordinating a fly over for the National event when Frank approached me. He introduced himself and we started talking. We quickly found out that we had an interest in each others occupations.” “I am a huge supporter of the men and women in our armed services,” said Frank. “For me, meeting Burt was like meeting a rock star. I have always thought I may have had “the right stuff” and in another life might like to have pursued a military career, so getting the opportunity to hang out with a fighter jock was very cool. Burt and I stayed in contact and he was actually scheduled to take our class in Vegas over a year ago. Just a few weeks before the class however, he got sent to Baghdad for six months!” 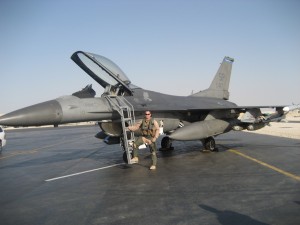 The deployment didn’t cool the Major’s desire to get behind the wheel, however, and he rescheduled for the Super Comp dragster program in Houston when he returned from the Middle East. “I’ve met a number of the drivers and although I got a chance to sit in Tony Schumacher’s ARMY Top Fuel car, I’d never been in a dragster with the engine running until Frank’s school. It was a great experienc e,” said Burt. “My first run was amazing. Although I am trained to withstand 9G turns in a jet fighter, the first run is something I’ll always remember. It didn’t take long…but it was beyond cool.” Although the similarities between fighter jets and dragsters are small, there are some things that helped the Major adapt quickly to the dragster. “As pilots, we train for hours on end before we are allowed to fly any aircraft. This habit of practicing and visualizing the aircraft’s cockpit, controls and procedures is every bit as important in preparing to drive a race car,” said Burt. “Frank teaches how to train for best performance, and in fact he asked me to write an article about ‘chair flying’ (which is what pilots call it) for his class. He distributes the article to his students.” According to Hawley, the Major ‘aced’ the course and received his NHRA S/C license in the minimum number of runs. “That’s what I expected,” added Hawley. The Major was high in his praise for the school. “Frank and his staff did a fantastic job, he said. “The cars, the curriculum, the staff…everything was first class, fun and set up in a great learning environment. I’m looking forward to returning and trying something a little faster.” For now, it’s back to Randolph Air Force Base in San Antonio, where Burt’s latest assignment is teaching a course called Introduction to Fighter Fundamentals (IFF) to newly certified T-38 pilots. “The course could be titled ‘Fighter Pilot 101’ and introduces the pilots to the art of air-to-air combat,” explained Burt. “We take these young pilots that already know how to fly the T-38, but now teach them how to employ the aircraft as a weapon. I really enjoy teaching these eager pilots and sharing my experiences in the F-16 with them.” “Burt’s teaching is similar to what we do…except those guys do it at closure rates approaching 1000 mph, it’s 3-dimensional, they turn at 9G’s, they use guns, missiles and rockets and they all have engineering degrees!” said Hawley jokingly.   To view our Super Class video or obtain more information on all available classes, dates and locations for Frank Hawley’s Drag Racing School, visit the school’s website – www.frankhawley.com – or call 866-480-7223 (Outside U.S. 678-804-8835). The school’s also on Facebook, Twitter @Frankhawleydrs, Instagram – frankhawleydragracingschool and YouTube!   A decision to attend Frank Hawley’s Drag Racing School is an easy one. “I am often asked how come it looks like I know what I am doing in a fuel funny car and my answer is ‘I listened to everything Frank Hawley told me.’ I do not have natural talent. Frank’s instruction on how to drive a Super Comp car is exactly what you need to drive a Funny Car. If you have the desire and listen to Frank, you too can drive any type of race car. Honestly, I think the classroom part of the course is much more important than the racetrack part of the course. He is the most thorough teacher I have ever met.” – NHRA Funn y Car Driver Robert Hight “The information I received at the School from Frank has improved my life professionally and personally. Everyone that wants to improve their mind and their skills should take this course.”- NHRA Top Fuel Driver Antron Brown “I started at Frank’s in his Alcohol Funny Car class. It was a great program and got me started in the right direction. I’d recommend his course to anyone. I always say you’re only as good as the people you surround yourself with, and Hawley’s School is a heck of a place to start.” – NHRA Top Fuel Driver Tony Schumacher “Frank knows what he’s talking about. He understands the demands placed on drivers today and is able to work with drivers at all levels, from novice to Pro. If you’re thinking about race instruction, you need to go to Frank.” – NHRA Top Fuel/Funny Car/Pro Modified Driver Melanie Troxel Upcoming SC/SG Classes Listed Below. Call for PSB, Top Dragster, Top Sportsman, TAFC and TAD dates! July 10-11, 2012 – Auto Plus Raceway, Gainesville, FL July 16-17, 2012 – Summit Motorsports Park, Norwalk, OH July 24-25, 2012 – Bandimere Speedway, Denver, CO August 7-8, 2012 – Auto Plus Raceway, Gainesville, FL August 21-22, 2012 – Maple Grove Raceway, Reading, PA September 11-12, 2012 – Auto Plus Raceway, Gainesville, FL September 25-26, 2012 – Royal Purple Raceway, Houston, TX October 1-2, 2012 – Las Vegas Motor Speedway, Las Vegas, NV October 3-4, 2012 – Las Vegas Motor Speedway, Las Vegas, NV October 16-17, 2012 – Auto Plus Raceway, Gainesville, FL November 6-7, 2012 – Auto Plus Raceway, Gainesville, FL November 19-20, 2012 – Auto Plus Raceway, Gainesville, FL December 4-5, 2012 – Auto Plus Raceway, Gainesville, FL December 27-28, 2012 – Auto Plus Raceway, Gainesville, FL