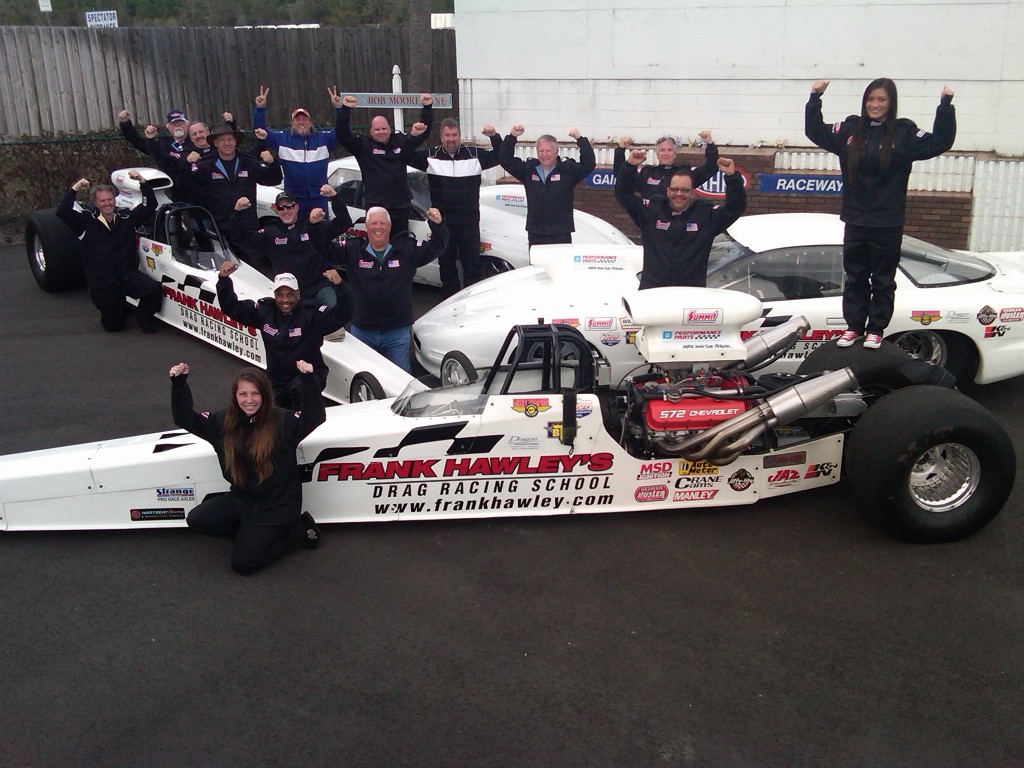 Students attending classes at Frank Hawley’s Drag Racing School continue to be diversified not only in gender, age and background, but also come to work with the world renowned instructor from all over the globe.  Such was the group from the latest Super Class conducted in Gainesville, Florida, which included drivers from across the U.S. as well as a young lady with a passion so intense for drag racing, that it brought her all the way from Norway.

Long time racer, Walter Gordon came to the school from California wanting to get a new outlook on his racing.  “I thought a fresh perspective would be helpful,” said the production and warehouse manager, who drove one of the school’s Firebirds during class. “I have several years of circle track experience and over three decades of drag racing.  The class was very good.  Frank gathers a lot of info and then gears it to help one apply it to racing as well as other things. I’m looking forward to taking what I learned and will be racing for this year in both bracket and sportsman categories.”

Baton Rouge, Louisiana resident, Dustin Day was quick to point out his reason for choosing Frank Hawley’s Drag Racing School.  “I heard many great things about Frank’s class and felt that I would benefit the most from his experience and guidance,” said the State Farm Agent. “It was definitely the right decision and I just want to thank Frank for the whole experience.  I have been around drag racing all my life and have always enjoyed the sport, I can honestly say that I have the fever!”

Like fellow classmate Walter Gordon, Day also spent his time on the track driving one of the school’s Chevy Performance 572ci powered Firebirds. “I was uncertain as to what to expect from the school and just assumed that it would be based around driving the car.  Boy was I wrong,” he exclaimed.  “You learn so much more about the mental aspects of racing which separates a successful drag racer from all others.  I am currently in the process of building an LSX drag radial car and will be competing in the LSX Shootout series as well as bracket racing in between to build my racing resume’.  One of the biggest takeaways from Frank’s class was learning that ‘I’am the only threat to my being successful in drag racing or anything else I do in life.”

Making a whopping nine thousand mile round trip to attend the class was Mayrita Halvorsrud from Norway, who is currently a full time college student, studying economics and soon starting on her master degree.

“I wanted to improve my driving skills and took the class for the experience and to learn more about drag racing,” she explained. “I also wanted to try a faster car and something different from what I’m used to. A year ago I had no clue how to drag race and just got some tips here and there.  I wanted to learn from the best. 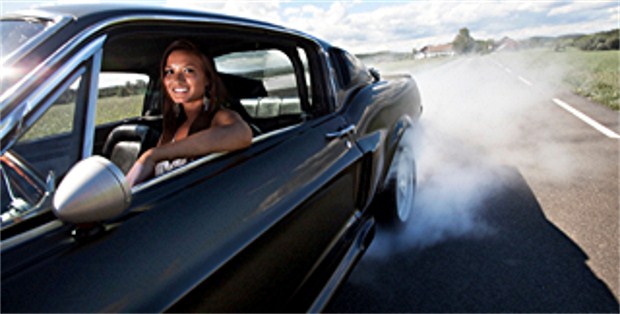 Mayrita and her father made a trip to the states when she was eighteen and found an older Mustang for her to drive and race. She noted the differences between racing her car and the Super Gas Firebird during her time at Hawley’s school. “It was a whole other procedure from driving mine, I knew about the start and stopping procedure, the burn-out procedure, but had no clue about the trans-brake and at first that made me a little insecure.”

“And the power and the speed, it was a whole new level,” she continued about driving the school car.

Mayrita licensed not only in the Firebird, but chose to cross grade her new NHRA license to the longer wheelbase and made the required runs in one of the school’s dragsters. “When I first sat in the dragster, I was scared, but it was fun! I have underestimated the dragster, but the [door] car is still my choice. I really want to be good at driving and this class has given me motivation. Unfortunately in Norway, we only have one racetrack. But I’m thinking about taking a year in the U.S. since my school offers programs in Florida, so maybe my dream can become true.

“Frank’s mental training and how to react or handle different situations, all that was new for me,” she added. “It definitely is going to be useful for me for races in the future and even in situations like exams and meeting new people.” 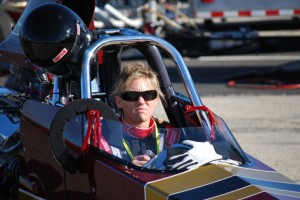 Sarah Edwards attended Frank Hawley’s Drag Racing School in the summer of 2010, where the then 18 year old took part in the school’s Super Class at Maple Grove Raceway in Reading, Pennsylvania. “I left [the class] with my Super Comp License,” she reflected. “That was the first time I had ever gone down a race track or sat in a race car, I just knew I wanted to do it. Frank Hawley’s class was a huge learning experience and I couldn’t have asked for a better learning environment both in the classroom and on the track. Everyone was so knowledgeable and nice.”

A year after attending her Hawley class, Edwards purchased a dragster and a trailer. Her dragster is set up with a 555ci BBC and making 927HP on the dyno, is equipped to run Super Comp and Top Dragster.

For 2012, Edwards plans to spend a lot of time with her new dragster at her local track in New Jersey. “Being that we live in the Northeast, the weather plays a huge factor. As soon as the cold air moves out and the track opens, I plan to spend many weekends at Atco testing. I have a lot to learn about my car and I look forward to getting comfortable in it, before I set my mind to competing with it.” 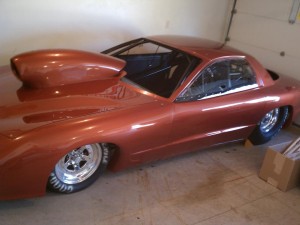 Wisconsin resident and Super Class Graduate, Doug Simpson is currently putting the finishing touches on his brand new 4130 tube strut – 4 link car.  His new ride will be powered by a Reher-Morrison 565ci BBC backed with a powerglide transmission. “It was fabricated by Jim and Jon Quinn at Chassis Service Unlimited in Chicago. The car is super clean and has a great deal of attention to detail.  It was recently painted at Precise Auto Body in Kenosha, WI by Brian Ambrosini of wheelstanding AMC Gremlin fame,” Simpson pointed out.  “I’m really looking forward to getting it out and making some passes in it as soon as the snow clears.”

“I really enjoyed my time at Frank Hawley’s Drag Racing School and I recommend Frank’s school any opportunity I get,” he added. “I look forward to attending some additional offerings.” 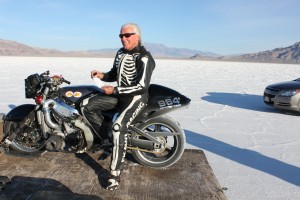 Billy Shoemaker attended the Pro Stock Motorcycle course at Frank Hawley’s Drag Racing School  led by George Bryce.  “I value that experience and use the training every time I enter a competitive event, regardless of the brand of racing.  I have recommended your Pro Stock Motorcycle course to many of my friends and will continue to do so.  I’m thankful for the advantage that I have as a result of Frank’s school,” he said.  “I still do some drag racing with my Harley Davidson V-Rod Destroyer, but have redirected much of my time toward the world of Land Speed Racing.”

Since attending his Pro Stock Motorcycle class,  Shoemaker has set an additional Land Speed Record at the Bonneville Salt Flats as well as being inducted into the Bonneville 200 MPH Club.  In 2011, he teamed up with Bill Warner, who is currently the fastest in the world on a sit on Motorcycle (non-streamliner) at 311 MPH.  Since then, Shoemaker has become the second fastest in the world at 269 MPH and accomplished the feat at the Mojave Mile in October 2011.  He also set the track record at the Texas Mile in October 2011, at 255 MPH. 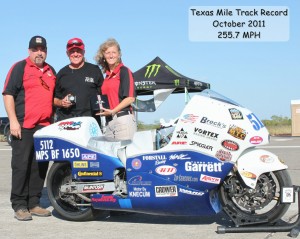 “For 2012, we will compete at the Texas Mile in March, Ohio Mile in April, Mojave Mile in May, Loring in July, and the Bonneville Salt Flats in August,” he continued. “We will attempt to narrow the gap between the world’s first and second fastest records.  I will be 66 years old in April 2012.  The older I get – the faster I go!”

We know many of our graduates have gone on to purchase cars, build cars, rebuild cars or already have cars and are out there racing them.  We’d like to include you in our next Grad Spotlight! Email us and let us know what your plans are for the season ahead.