Remaining one of the most popular dates for Frank Hawley’s Drag Racing School, the Super Class that is held at Gainesville Raceway annually between Christmas and New Year’s, boasted eighteen drivers seeking everything from improving their driving skills to experiencing drag racing for the very first time.

Scott Cokeing of Eads, Tennessee has been a drag racing fan for many decades. The fifty year old mechanical engineer last drove down the quarter-mile more than thirty years ago in a street car. When he came across an ad for Hawley’s Drag Racing School while searching for some auto parts, he decided to give himself a present.

“Up until that point, I had no plans on attending a drag racing school but I decided to give myself a Christmas present. Sure glad I did,” confessed Cokeing. “My recent drag racing experience before the school had really only been a spectator.  I enjoy watching drag racing and have been to several national events and only dreamed about actually driving down the ¼ mile in a dragster.  As a mechanical engineer, I have always enjoyed machines and how they work.  The modern race car is becoming very advanced, following many of the same technologies used in the aerospace industry.” 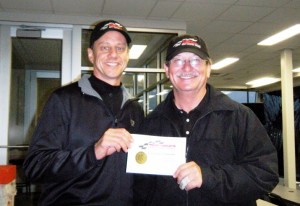 Cokeing was one of eight other dragster drivers who participated in the late December class and he points out that his rather spontaneous decision to attend Hawley’s class was one that further ignited his personal passion for drag racing.

“After the class I bought a turnkey dragster and trailer,” he said. “I am ready for the season to open here. [Memphis International Raceway] Being new racer, I realize there is a lot to learn to compete with the seasoned drivers, however I believe I made a huge leap forward by taking Franks class.”

“During the classroom time, Frank’s covers a lot of interesting and diverse material, while focused on improving your drag racing skills,” he continued. “It most certainly can be used in your everyday life.  There is something for everyone to glean, whether drag racer or not. Frank’s instruction and invaluable racing tips are clear and easy to understand, both in the classroom and on the track.  Frank gets you to think out of the box, and shows you visually what you are doing and how to correct it to become a better driver.” 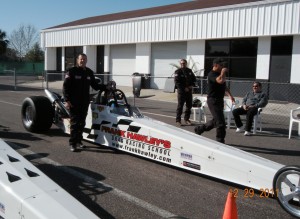 “What an exhilarating learning experience,” Cokeing said of his Super Class.  “Previously only a spectator, I wanted to get in the action. I have never been in a real race car before attending Frank’s school and I wanted to get a solid racing foundation first.  My first ever ¼ mile run was 8.2 seconds and 160 mph, what a rush. Well now I’m hooked and with my new dragster I will start racing this year. Frank gave me the basic tools to be a safe and confident driver, no more sitting in the bleachers. Thanks Frank!”

Cokeing also chose to participate in the school’s video program and not only acquired one of the RePlay XD 1080HD cameras, but captured memories of his ‘thrilling experience’ while at the school to cherish and share for many years to come. He took the time to put together a short compellation of his class and has shared it for others to enjoy on YouTube.

For more information on Frank Hawley’s Drag Racing School, including all course offerings, locations and dates, call 866-480-7223 [Outside U.S. 678-804-8835] or www.frankhawley.com Plus “Like Us” on Facebook for all the details and your chance to win a 25th Anniversary T-Shirt and qualify for the Grand Prize of a Classroom/Reaction Time Clinic with Frank Hawley!