Frank Hawley’s Drag Racing Students Head South for the Winter It’s not unusual for residents of northern states to migrate south to Florida when temperatures seem to also go “south” for the winter. It is the 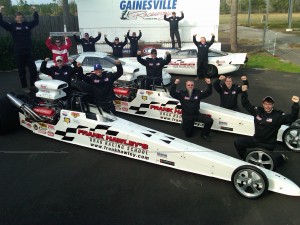 time of year when the Sunshine state lives up to its moniker. A recent December class that included Tom Laskowski and Paul Smith Sr. and Jr. were among those who recently journeyed to Gainesville, Fla. with specific ideas in mind other than basking in the warm sun. They were there to learn and improve their drag racing proficiencies by attending the Frank Hawley Drag Racing School at Gainesville Raceway. Laskowski, for example, came from Seven Hills, Ohio, for the two-day Super Comp/Super Gas class and took home not only more knowledge of the driving/competitive aspects of the sport, but some key mechanical information – and his Super Gas competition license. “I have been racing for 30 years,” said Laskowski, who operates a wilderness survival school. “I didn’t do any formal training when I started racing, and I thought this would be a good opportunity get better at what I do as a hobby. “I achieved everything I was hoping for. I found out I wasn’t staging my 11-second 1968 Pontiac properly. Frank pointed it out on the video they take of our runs. The front of the car wasn’t lined up straight. He also taught me how to improve my reaction times, and I learned technical information on the transmission and the ignition system that I can use.” Laskowski wanted to go fast, and he did, registering a quarter-mile lap at 140 mph in one of the school’s nine-second Super Gas car. “That was an important aspect of the school,” he commented. “After driving that nine-second car, I think now when I drive my 11-second car it will give me time to react to things a little differently. I’m going to be more comfortable (driving) at 120 mph. “Frank’s school is the real deal. He treated us like professionals and answered all of our questions. I learned a lot. I was excited about the school before I went there, but honestly, I was more excited when I came home. “I can’t wait to get back on the track again.” The Smiths, Paul Sr. and Paul Jr., drove their 1998 Corvette to Gainesville from their Alpharetta, Ga., home as well as on the Gainesville Raceway asphalt. Paul Jr. took over the driving chores from his father in 2003 and has been competing ever since. Paul Sr. attended the classes. “There’s a lot I do subconsciously – like block things out and not letting things get to me,” said Paul Jr. I didn’t realize how much of that is necessary to stage the car properly and be on the right page when the light goes green. “Frank does a real good job of pointing out exactly what’s going on in your head . . . that you aren’t paying attention to. Staging the car is probably hardest part of racing. It seems easy when you go up and stage between the beams and the light turns green. But there are a lot of things going on besides making sure you are in the right part of the track, lined up in the middle and heading straight down the track.” While Paul Jr. has probably had a lot more seat time than most of the other people in the class he knows there is always something to learn. “This wasn’t a beginner’s course for me, but just for me to be aware of what I do in the race car is priceless. That was an eye-opener to see how in-depth the drag racing process is,” he remarked. Paul Jr. races selected series each year. Last year he became the only Corvette driver to win a Pinks All Out special event. It came at Atlanta Dragway, his home track. “Frank’s school exceeded our wildest expectations,” praised Paul Sr. “We had a good group of people with varied backgrounds and Frank did an excellent job of instructing them.” “The school was absolutely phenomenal,” added Paul Jr. “There’s probably not a person on the planet – even if they never plan on drag racing – that won’t learn something from going through the school.” In addition to the Super Classes, Frank Hawley’s Drag Racing School also offers licensing courses in Top Dragster, Top Sportsman, Top Alcohol Dragster, Top Alcohol Funny Car and Pro Stock Motorcycle. All courses offered year-round and for the next few months, drivers can break away from the cold weather up north and visit warm, sunny Gainesville, Florida to get prepared for the 2012 season. For more information on Frank Hawley’s Drag Racing School, including offerings and dates, call 866-480-7223 [Outside US 678-804-8835] or www.frankhawley.com Plus “Like Us” on Facebook for all the details and your chance to win a 25th Anniversary T-Shirt and qualify for the Grand Prize of a Classroom/Reaction Time Clinic with Frank Hawley! Facebook Page